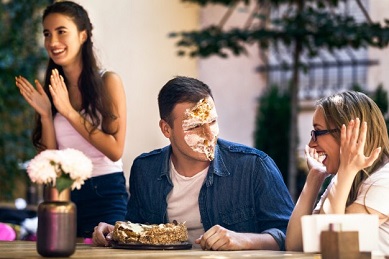 Whilst we all find ourselves amused – be that as the joker or the fool – by this annual tradition of practical jokes, the exact origin behind April Fool’s Day is still a matter of speculation. Which prankster started this bizarre practice? What’s so funny about the first day of April? Why do we still fall for the same jokes every year?! Just remember, if you’re planning on landing your own prank on a chosen target, it only counts before midday!

As it stands, there are several historical theories explaining where April Fool’s may have come from. One popular hypothesis is that this amusing tradition is linked to Hilaria, a festival celebrated way back in Ancient Rome at the end of March. This event shared the same sentiment of humour and light torment, with people of the dressing up in disguises and mocking those around them. They sure knew how to have a good time!

Another suggestion links the trickery element of April Fool’s with the time of the year in which it takes place. Some argue that the tradition taking place around the spring equinox in the northern hemisphere is reflective of the way Mother Nature duped us with weather patterns that are even more unpredictable and susceptible to change than usual (they got that right.)

Regardless of where this wacky tradition started, the direction in which it seems to be going is increasingly more commercial and large-scale than its humble origins. Ever seen a paint company advertise their innovative new tartan paint? Best to check the date it was posted before you start planning the new décor of your spare room!

Whilst April Fool’s Day remains an unofficial holiday, its impact is felt each year with large-scale media pranks and humble personal attacks alike. Above all else, it will likely always be associated with laughter, smiles and fun. Let’s be honest with ourselves, nothing will compare to the universal satisfaction of yelling “April Fool’s!” – no matter how old or cynical you get.

In light of the current circumstances, even the most optimistic of us can find ourselves struggling to enjoy some light-hearted relief from time to time. With the ongoing hardships we face at the moment, the often gimmicky or cliché associations with April Fool’s Day are better placed than ever to give us all a bit of temporary respite to laugh and joke about something totally silly.

What’s your all-time favourite April Fool’s prank? Are you most often the one behind the practical joke, or the object of someone else’s?